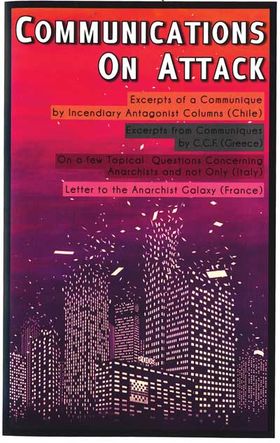 Communications On Attack' explore a contemporary dialog between possibly divergent tendencies within Insurrectionary Anarchism. On the one hand there are individually righteous, ethically driven (sometimes nihilist) and anti-social attacks of groups such as the Conspiracy Cells of Fire (CCF) and Informal Anarchist Federation (FAI). On the other, this developing and spectacular tendency is responded to by comrades of Italy and France anonymously proposing to oppose society along the lines of existing social conflict. Social versus anti-social? Is that the question? The four texts in this short zine comprise a great introduction to this developing tension within contemporary insurrectionary anarchism.