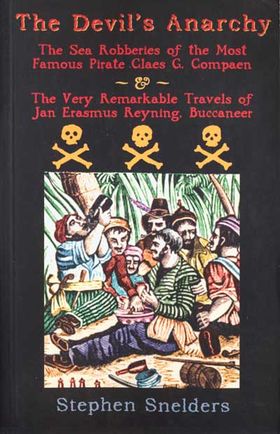 Introduction to the Second Edition

The Sea Robberies of the Most Famous Pirate Claes G. Compaen

The Other Loose Roving Way of Life: The Very Remarkable Travels of Jan Erasmus Reyning, Buccaneer

Memoirs of the buccaneers.

The making of a buccaneer.

Origins of the buccaneers.

Indian influences on the buccaneers.

Liberty, equality, and fraternity in the Brotherhood of the Coast.

The struggle for Tortuga and Jamaica.

Consequences of the conquest of Jamaica.

Customs of the coast.

Reyning's first voyage with the Brethren.

Partnership with Rock the Brazilian.

Atrocities of the buccaneers.

A hallucinatory way of life.

The expedition to Panama.

The Brotherhood sets out.

The conquest of Panama.

The end of a pirate.

The Devil's Anarchy: The Politics of Piracy

Hierarchy vs. Anarchy I.

The Golden Age of piracy.

The old, or Jolly, Roger.

A note on Captain Johnson.

An eternal festival. A brotherhood of pirates. Violence, cruelty, and women. The politics of piracy.