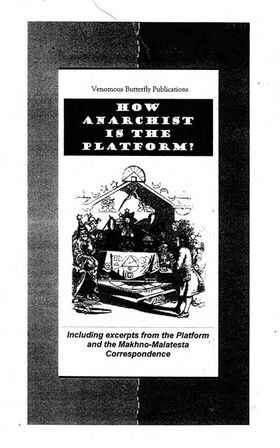 "One could legitimately ask me why I am printing a pamphlet consisting of texts from a debate nearly eighty years old. The reason is simple. In recent years, for reasons that I do not understand, some anarchists have begun again to promote "The Organizational Platform of General Union of Anarchists (Project)" also known as "the Organizational Platform of Libertarian Communists") published by the Dielo Trouda group as a basis for current anarchist practice. Although texts and letters were slow in getting to him in fascist Italy, Malatesta nevertheless attempted a comradely critical debate with Nestor Makhno about the Platform, and Malatesta's critique of this document and the organizational structure it proposes remains among the best."