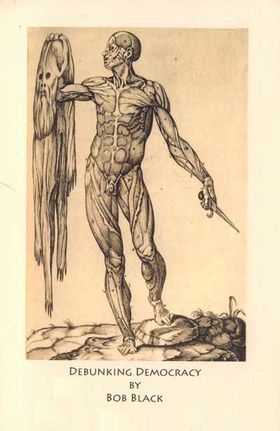 Bob Black takes on another Leftist sacred cow: democracy. As he astutely points out, everyone interested in attaining/seizing and maintaining power is a democrat -- at least by their own reckoning. Researching the relevant literature of philosophy and political science, Black finds plenty of objections to institutionalized mob rule and the chaos which naturally follows, but he finds almost nothing written in its defense, merely its glorification. From the likes of Kim Jong Un to David Graeber, everybody claims to be in favor of democracy; since Everyone now accepts it as an inevitable feature of modern political life, there's no need to justify it. But democracy is not like gravity.