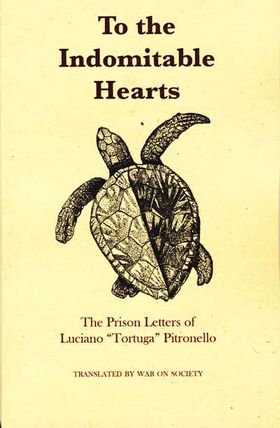 Luciano "Tortuga" Pitronella sits in prison (house arrest) convicted of the attempted bombing of a bank in Santiago, Chile in 2011. After being slandered and disrespected by the press and disowned by many of his own comrades, six years later he is still fighting for his freedom. This book collects letters to and from him in a passionate and heart-felt collection that is inspiring and touching. A benefit for anarchists imprisoned by the Chilean State. Translated by War On Society.

On the morning of June 1st, 2011, two individuals pulled up on a motorcycle in front of a bank in Santiago, Chile. One got off carrying a homemade explosive device, which detonated accidentally in his hands, blinding him, setting him on fire, and injuring his hands severely. In the hospital, where he was placed under armed guard, he was identified as Luciano Pitronello Schuffeneger, better known by his nickname “Tortuga,” Spanish for turtle. Demonized by the sensational mass media, condemned as a terrorist by his own sister, and abandoned by some former comrades fearful of repression, he faced the certainty of prison while saddled with horrifying injuries. Yet against all conceivable odds, he turned around his unbearable situation, persisting in his physical therapy to recover beyond expectation, overcoming suicidal depression, and defeating legal efforts to prosecute him under an anti-terrorist law. He was sentenced to six years of house arrest, and remains unrepentant and committed to anarchist struggle.