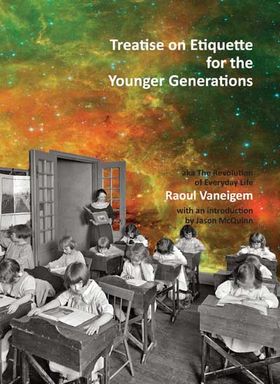 Raoul Vaneigems Treatise on Etiquette for the Young Generations aka "The Revolution of Everyday Life", is a refusal of representation and bureaucracy, and emphasizes autonomous desire, play and festivity. Featuring the original French title, this edition reflects the anarchistic impulse of the Situationist International and the events of May 1968.

The moment of revolt, which means now, is hallowing out for us in the hard rock of our daily lives, days that miraculously retain the delicious colours and the dreamlike charm which - like an Aladdins cave, magical and prismatic in an atmosphere all its own - is inalienably ours. The moment of revolt is childhood rediscovered, time put to everyones use, the dissolution of the market, and the beginning of generalised self-management.

Introduction to the 2012 Edition by Jason McQuinn

The decline and fall of work

Decompression and the third force

The age of happiness

Technology and its mediated use

The organization of appearances

The fascination of time

The interworld and the new innocence

'You won't fuck with us much longer!'

A toast to revolutionary workers