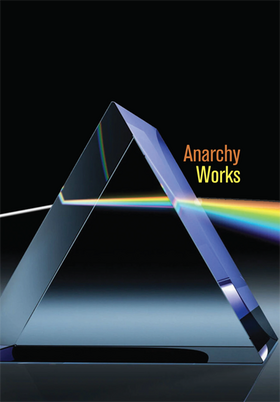 This book takes examples from around the world, picking through history and anthropology, showing that people have, in different ways and at different times, demonstrated mutual aid, self-organization, autonomy, horizontal decision making, and so forth--the principles that anarchy is founded on--regardless of whether they called themselves anarchists or not. Too well documented to be strictly mythology, and too generalized to be strictly anthropology, this is an inspiring answer to the people who say that anarchists are utopian: a point-by-point introduction to how anarchy can and has actually worked.

What exactly is anarchism?

A note on inspiration

The tricky topic of representation

A broader sense of self

How will decisions be made?

How will decisions be enforced?

Who will settle disputes?

Meeting in the streets

Without wages, what is the incentive to work?

Who will take out the trash?

Who will take care of the elderly and disabled?

How will people get healthcare?

How will exchange work?

What about people who still want a consumerist lifestyle?

What about building and organizing large, spread-out infrastructure?

How will cities work?

What about drought, famine, or other catastrophes?

Meeting our needs without keeping count

What's to stop someone from destroying the environment?

The only way to save the planet

Who will protect us without police

What about gangs and bullies?

What's to stop someone from killing people?

What about rape, domestic violence, and other forms of social harm?

How could people organized horizontally possibly overcome the state?

How do we know revolutionaries won't become new authorities?

How will communities decide to organize themselves at first?

How will reparations for past oppressions be worked out?

How will a common, anti-authoritarian, ecological ethos come about?

Could an anarchist society defend itself from an authoritarian neighbor?

What will we do about societies that remain very patriarchal, or racist?

What will prevent constant warfare and feuding?

What about other problems we can't foresee?

It Works When We Make It Work