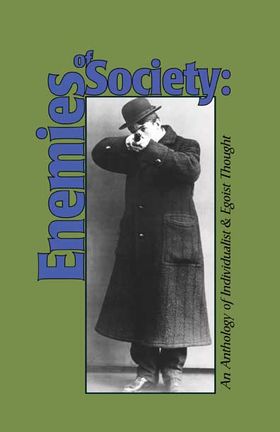 An Anthology of Individualist & Egoist Thought

This book tells the story of the most neglected tendency in anarchist thought; egoism.

Egoism, and individualist anarchism, suffer a different kind of fate. It is not a great history and glorious failure but an obscure series of stories of winning, with victory defined by the only terms that matter, those of people who lived life to their fullest and whose struggle against the existing order defined them. This struggle was not one of abstractions, of Big Ideas, but of people attempting to claim an authentic stake in their own life.

Inspired by the writings of Stirner's "The Ego and His Own" the assertion these people make is not of the composition of a better world (for everyone) but of how the machinations of society, especially one of abstractions and Big Ideas, have shaped the individual members of that society. How everything that we know and believe has been shaped (by structure and intent) into a conformed, denatured shadow of what we could be.

Individualists anarchists have always argued that anarchism should not be a version of heaven on earth but a "plurality of possibilities". This has relegated their activity to the actions that people make in their lives rather than participating in political bodies and formations that shape, and participate in, society. Egoists have gone to war with this world, robbed banks, practiced free love, and won everything except those things worth nothing: history, politics, & acceptance by society.

People like you have been denounced as "enemies of society". No doubt you would indignantly deny being such and claim that you are trying to save society from the vampire of the State. You delude yourselves. Insofar as "society" means an organized collectivity having one basic norm of behavior that must be accepted by all (and that includes your libertarian communist utopia) and insofar as the norm is a product of the average, the crowd, the mediocre, then anarchists are always enemies of society. There is no reason to suppose that the interests of the free individual and the interests of the social machine will ever harmonize, nor is it desirable that they should. Permanent conflict between the two is the only perspective that makes any sense to me. But I expect that you will not see this, that you will continue to hope that if you repeat "the free society is possible" enough times then it will become so.

1. Rejecting the Stamp of Group Approval: first wave individualists in the US and Europe

James L. Walker: A Unique One

What is Justice? by James L. Walker

On Rights, by James L. Walker

Stirner on Justice, by Tak Kak

The Land of the Altruists: a parable for the infantile class, by John Beverly Robinson

What do the Individualists Want? by The “Reveil De L'Eschlave" Group of Paris

Cry of Rebellion, by Renzo Novatore

In the Kingdom of the Spooks, by Renzo Novatore

The Bonnot Gang: A Reminiscence, by E. Bertran

Notes on Individualism, by E. Bertran

Three European Individualists: some notes on Armand, Martucci, and Novatore, by S.E. Parker

Is the Anarchist Ideal Realizable? by E. Armand

In Praise of Chaos, by Enzo Martucci

The Anarchists, by Jim Kernochan

Men against the State: the expositors of individualist anarchism in America, 1827-1908, a review by S.E. Parker

The Influence of Tucker's Ideas in France, by E. Armand

Stirner on Education, by S.E. Parker

Anarchism vs Socialism, by S.E. Parker

Stirner on Nietzsche, by J.N. Figgis

5. A Maze to Trap the Living: society & the unique one

Anarchism and Individualism, by Georges Palante

Anarchism, Society, and the Socialized Mind, by Francis Ellingham

A Note on Authority, by Enzo Martucci

A Letter to a Friend, by Laurance Labodie

Superstition and Ignorance vs Courage and Self-Reliance, by Laurance Labodie

Some Notes on Anarchism and the Proletarian Myth, by S.E. Parker

Enemies of Society: An Open Letter to the Editors of Freedom, by S.E. Parker

Anarchism, Individualism, and Society: Some Thoughts, by Scepticus

Freedom and Solitude, by Marilisa Fiorina

The Morality of Cooperation, by S.E. Parker

In Defense of Stirner, by Enzo Martucci

Malfew Seklew: The Jester Philosopher of Egoism, by S.E. Parker

Brand: An Italian Anarchist and His Dream, by Peter Lamborn Wilson

Down With Civilization, by Enrico Arrigoni (aka Frank Brand)

My Anarchism, by S.E. Parker

Flaming Resurrections of a Charred Alphabet (a glossary of basic terms)

To Sketch the Echo and to Paint the Link! (a reading list)