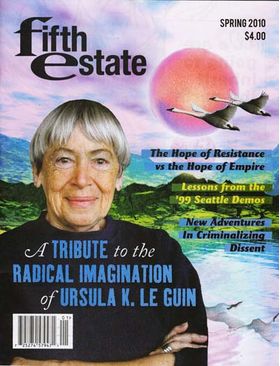 The Spring 2010 issue of this oldest of u.s. anarchist magazines (despite no longer having the word on its cover) is dominated by praise of Ursula Kroeber LeGuin, in the form of essays, reviews, and a couple of fan letters, as well as a reprint of LeGuin's "A Non-Euclidean View of California as a Cold Place to Be."

Also in this issue are articles on Copenhagen in the light of the 10 year anniversary of Seattle, by the Solnit himself; modern repression (with Tortuga House and Midwest activists used as cases in point); some spirited letter-writing and rebuttal, and a scathing piece on the history of the Nobel Peace Prize and what that says about a certain u.s. luminary's receipt of same.