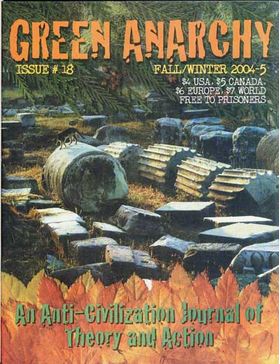 Often underplayed in a green anarchist critique, Class Struggle is tackled from various insurrectionary, primitivist and personal perspectives. A sampling of ideas is offered from which to draw inspiration from in our daily struggles against the instituions of control and domestication. Articles include "The Birth and Death of the Worker," "You Won't Find Me on Friendster," and "A Primitivist Strategy Proposal." Featuring John Zerzan, Dave Anatgonism on Camatte, Reclaiming Franz Kafka for Anarchy, Theres Kintz, Rob Los Ricos, and Alfred Bonanno.

Two essays written in 1991 in the wake of the first Gulf War: Ten Days That Shook Iraq, and The Class Struggle in Iraq--An Interview with a Veteran.