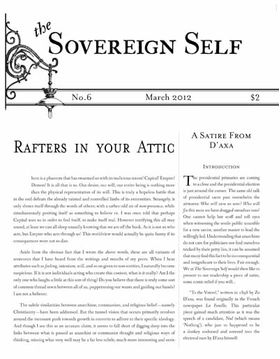 The Sovereign Self is a charming newsletter produced out of Tacoma, Wa. bringing egoism and individualist anarchism out of the shadows of the 20th Century, where it has been a regular (if frequently reviled) tradition since Novatore and Emile Armand (among many others) took it up.

This issue includes a satire from D'axa (from 1898), a critique of the push for converts among many anarchists, a new letters section, a critique of nihilist anarchists, a poetic rant on the animalness of us all, a critical review of Desert, the new booklet from the u.k., a poem by anonymous (from 1901), and the announcement of a new anarchist printing press in Seattle.