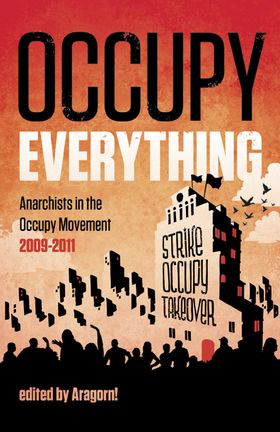 Anarchists have been part of Occupy since before it was even clearly a movement. This is a book where anarchists, in their own words, express how and why they engaged in Occupy, what methods they used, and how to evaluate the success of Occupy on anarchist terms. It also expresses the flexibilty, energy, and experience that anarchists brought to The Occupy Movement as it moved beyond lower Manhattan onto the docks and streets of Oakland, the town square of Philadelphia, and abandoned buildings around the country.

The anarchists' way of operating was changing our very idea of what politics could be in the first place. This was exhilarating. Some occupiers told me they wanted to take it home with them, to organize assemblies in their own communities. It's no accident, therefore, that when occupations spread around the country, the horizontal assemblies spread too.
-From Nathan Schneider in The Nation

From Tsarist Russia to Zuccotti Park: the Paradox of Anarchism by Thai Jones

Squatting in the Beginning by ADILKNO

We are the Crisis by anonymous

The Characteristics of the Occupation by anon

Resolution by Public Assembly of Syntagma

Reclaim the Cities by Cindy Milstein

Occupied with Class by Phoenix Insurgent

Chicago – Open Letter to Occupy Chicago by some potential friends/enemies

Vancouver – Occupation is a Fuckin' Freak Show & notes for We, Antagonists by d.

Chapel Hill – This Building is Ours by anonymous

Santa Cruz – 75 Hours In by anonymous

Who Threw the Can of Green Paint by Ben Webster

We are Anarchists by anonymous

We are Our Own Demands by Cindy Milstein

Are We an Occupation or Just a Gathering by anonymous

The Port Shutdown was a Wild Success! by anonymous

Becoming Uncontrollable: an Anarchist Reflection on Occupy Seattle by anonymous

Open Letter to the Anarchists of Occupy Oakland by TEOAN

Letter from an Anonymous Friend after the Attack by anonymous

Statement on the Occupation of 520 16th St. by Some Friends of Occupy Oakland

Oakland's Third Attempt at a General Strike by Hieronymous

Violence and the Police

Seven Myths about the Police by CrimethInc

The Other Way to Occupy Denver by igloosRforever

A Somewhat Belated Intro Communique by The Turritopsis Nutricula Collective

Lost in the Fog by Lost Children's School of Cartography

A Debate on Occupation and the 99% by Cresencia Desafio & R.R. (anon)

On the Recent #occupations: a communique from W.A.T.C.H.

I'm Tired of This Shit by anonymous

Thank You Anarchists by Nathan Schneider