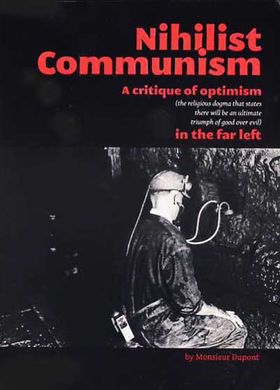 Originally self-published in 2003, now edited and designed by Ardent Press, still one of the most hard-nosed books to call the left to account -- with scathing, thoughtful rebuttals to those who continue to believe that the revolution is just a matter of consciousness-raising and recruitment, or that identity politics has anything to do with Marxist thought.

Many will reject the materialism inherent in this analysis, but we appreciate the logical consistency (and the occasional brilliance of writing) of Monsieur Dupont; so refreshing in a world in which people withdraw to muddle-headedness in incoherent attempts to fit all topics into some kind of grab bag, attempts seemingly designed to avoid offense rather than to follow ideas through to their logical (or even illogical) conclusions.
Unlike so many people who either reject theory all together (rather, who obscure the theory that they work from), or who embrace theory and ignore the ways reality doesn't fit their ideas, Msr Dupont reflected on their experience (and that of others) and changed their theory to suit their lives. We need more people who are willing to be unpopular, who work an idea until it groans, who reflect on real life experiences and then acknowledge the ways in which prevailing theory doesn't make sense, and who are then capable of challenging prevailing theory to be more coherent, more realistic, and more useful.
species being could be considered a companion text to Nihilist Communism, or vice versa: reading them together has been helpful for some. Nihilist Communism refers more to specific political occurrences, and species being fleshes out some of the more esoteric ideas.

Introduction to the 2009 edition

Preamble: This is the definition of class hatred

Introduction to the 2003 edition

This is the fable of the thirsty crow

We start, as we end, in simplicity

Dictatorship of the proletariat

Is Lenin on sale again?

On economic determinism and autonomism

a recap of our perspective

The optimism of revolutionaries

Recent interventions: May Days, Palestine, and the material base

Reply to “the real movement"

To get over the wall, we first have to get to the wall

Only we can prevent mythology

Anarchists must say what only anarchists can say

Something on political activism

Cruelty - or - the inclusion of the distributive sphere

How many of you are there?