Cart is empty
Cart is empty
View cart
Checkout
Home/Music & Video/Over Dressed and Under Arrest: Travis James and the Acrimonious Assembly of Arsonists 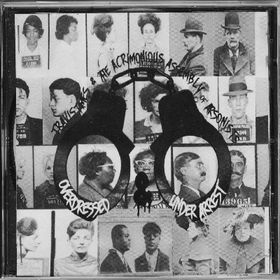 "Shortly after being selected by the Phoenix New Times as one of "14 Phoenix Musicians You Need to Hear in 2014," Travis James & the Acrimonious Assembly of Arsonists have released their latest album of quirky anarchist/nihilist anthems, "Overdressed & Under Arrest." Compared to everything from World/Inferno Friendship Society to being "the Meat Loaf of punk," The Arsonists' newest assortment of songs delivered on the promise that it would have "at least something for everyone to get upset about." The 10 accordion, piano and guitar driven songs aggressively address everything from sending letter bombs to authority figures to the complexity of interpersonal dynamics in radical/punk scenes. Dying Scene, a popular punk news source, referred to the new album as "something refreshingly different." Travis James & the Acrimonious Assembly of Arsonists has shared the stage with World/Inferno Friendship Society, Defiance Ohio, Blackbird Raum, Delay, Ghost Mice, Pat The Bunny, Hail Seizures, and many others."

Best band name ever? could be.

Listen to them at http://travisjames.bandcamp.com/

and buy their CD from us.

Everybody Lies (Truth Be Spoken)

Everybody Dies (The Night I Almost Died)

The Defense Rests in Peace