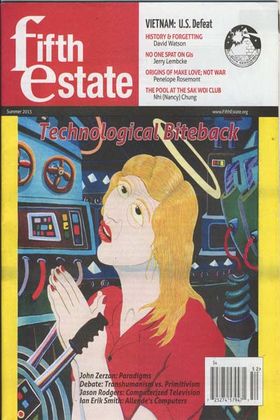 This issue's theme is Technological Biteback, with articles by John Zerzan ("Paradigms"), a debate between transhumanism and primitivism, Jason Rodgers on computerized television and the predictive powers of David Watson, and Ian Erik Smith ("Allende's Computers," a review of Cybernetic Revolutionaries: Technology and Politics in Allende's Chile), as well as a number of obituaries ( :( ), Linus O'Leary, Judith Malina, and Federico Arcos, from three remarkably different tendencies of anarchists... among other pieces.