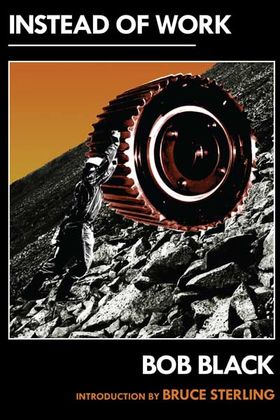 The latest from Bob Black, grump and gadfly, being a re-print of his most significant piece (The Abolition of Work), and other articles supplementary to it, as well as a brand new Afterthoughts (which updates his thinking and some references) and an introduction by Bruce Sterling,

Black has been a controversial anarchist figure and writer for two decades, and is known for (among other things) taking on sacred cows of the Left--anarchist and otherwise--like Murray Bookchin and more recently Noam Chomsky, both authors who were anarchists at one point and continue to have anarchist adherents. Black is also the author of Anarchy After Leftism, one of the first post-left anarchist texts. His fans extol his humor and word play, as well as his willingness to take and articulately defend unpopular viewpoints.

No one Should Work on Introductions -- Bruce Sterling

The Abolition of Work

Primitive Affluence: a postscript to Sahlins

No Future for the Workplace

What's Wrong with This Picture?

Why Not Call a Holiday?

What Work Is, and why that matters

Afterthoughts on the Abolition of Work