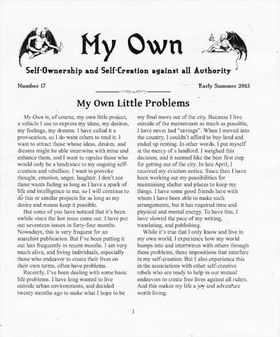 In which the editor talks about those little problems that have slowed him down, Nick Ford's surreal story "House of Bones" draws to its close so that the second story of "The Bewitchment" can begin in the next issue, surrealist Georges Henein describes the "anyone man," while dadaist Raoul Hausmann proclaims the dada world and its contempt for the Weimar conception of life. Also Anne Archet talks of the subcontracters for suicide while Ichabod continues his cynical mockery, and then there's poetry and reviews to annoy and delight.

My Own is a publication of anarchist, egoist, individualist ideas, literature and analysis coming from an explicitly anti-capitalist, non-market egoist perspective aimed at encouraging the interweaving of individual insurrections against all forms of authority, domination and enforcement of conformity

My Own is a provocation. I assume that's obvious to anyone who's read it... I want to provoke thought about the ideas expressed here. But since I don't have a gospel to spread, I also want to provoke discomfort among those who don't want to think and challenge their own sacred ideas. I'd rather drive such dullards away since they have nothing to offer me. This is why I play with words in a way that challenges even some of my own assumptions... So My Own is a game, a challenge, a wager. I am gambling that in this way, I will find the accomplices I desire.