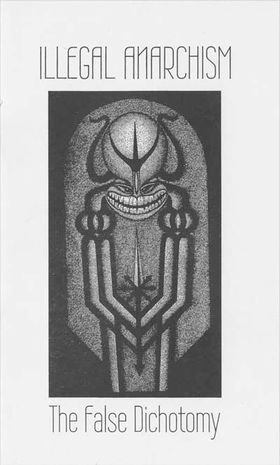 The False Dichotomy by Gustavo Rodriguez & Is the Anarchist Illegalist Our Comrade? by E. Armand (translated by Wolfi Landstreicher)

To be an anarchist is to exist outside of the law. Gustavo Rodriguez untangles the language that creates the false dichotomy of "legalistic anarchism" versus "illegalist anarchism." He argues that by 'illegalist anarchism' people mean "insurrectionist anarchism" and that moralists have created this split in a desire to mobilize the masses to revolt for social justice. Through the stories of the expropriators and exponents of propaganda by the deed, he traces the history of what is erroneously called 'illegal' anarchy. Anarchists from France, Italy, Spain, Mexico, and Chile among others are brought from the shadows and given back their voices, which were stolen by the legalists and then forgotten in the passing of time. (This piece is from a talk given at the squatted social center "La Casa Naranja" Tlalnepantla, Mexico in 2011).The piece by Armand is an examination of the reciprocal relationship between legal and illegal anarchism.