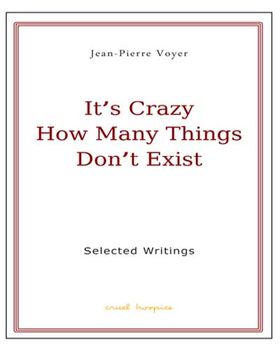 This is a collection of writings by the French thinker Jean-Pierre Voyer. "Jean-Pierre Voyer, has worked as a cab driver, a plumber and software programmer/entrepreneur. He never attended a university, and he is completely self-taught. He has a wicked sense of humor and all of his writings develop and make a critical analysis of his initial ideas. He has gone on record as saying that one of the goals of theory is to say what does not exist, in particular, the 'economy'. " - from the Introduction

The scandal of Marxism and of Situationism consists simply in claiming that the thought of Marx and the thought of the Situationists are true while the enemies of Marx and the enemies of the Situationists are still standing, as if the truth of a thought were not a practical question, a question of its power and of the annihilation of its enemies. In fact, Marxism is the victory of Stalin's 'thought,' that is, the victory of his police.

table of contents:
Reich, How to Use
Non-Well-Founded Set Theory; Putting an End to Marx's Reductionism
The Economy is Only an Ideology in Marx's Sense
My Goal in Life
What I am Satisfied With (1997)
There is No Society of the Spectacle
The Parthian Shot