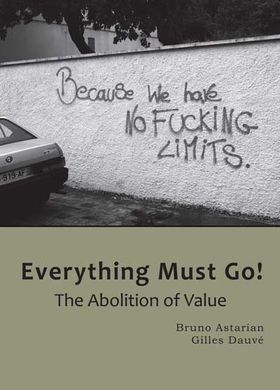 The main difference between present communist theory and its previous expressions is that it has now become impossible to conceive of communism as a society of associated producers.

This book is about a revolution (i.e. a historical break, not gradual peaceful evolution) that creates communism – not its preconditions. Wage-labour, work-time as cut off from the rest of our life, money, private property, State agencies as mediators of social life and conflicts, all of these must go, and not just be run by collectives. Social change will take time but will start from Day One : in the very early days, the way the insurgents will treat workplaces, organize street-fighting and feed themselves will determine the future unfolding of events.

No easy task in practice, nor in theory: questioning some of the basics of communism runs into supposed common sense as well as against long-held revolutionary principles.

First, what could a communist insurrection be ?

Secondly, we cannot dispense with revisiting the Marxian theory of value. We can no longer regard the first chapter of Capital as the founding stone of a theory of value adequate to our time.

Lastly, this is the real world we are talking about. From bicycles to child-rearing, everything relates to ways of life now determined by capital/wage labour relations. This is why the last part of the book broadens the field to a number of vital and daily issues, so-called small ones as well as big ones.