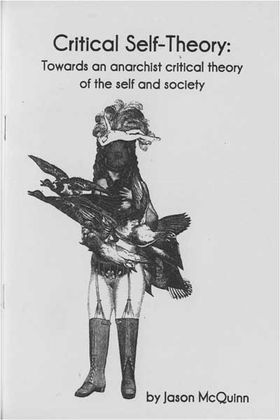 Jason McQuinn, a venerable figure in U.S. anarchist publishing (for decades a part of Anarchy: a journal of desire armed and now behind Modern Slavery), has for a few years now been doing presentations on the topic of this pamphlet (at the BASTARD conference, for example). As he states at the beginning of this pamphlet, any sincere theory of living must begin with the subjective, even though most people see theory as alien, something only useful to intellectuals. According to McQuinn, self-theory has been split into two fragments, on one side something we believe in (ideology, religion), which is usually abstract and rigid (see any one of the many "isms"). On the other side is everyday life, which usually isn't seen as theory but "just the way things are". On either side, the person's thinking is pretty much done for them.

Critical self-theory attempts to restore the alienated individual to a real social subject in the world, taking only what is useful from abstract ideologies and leaving the rest: an attempt to use dialectics to break free from stale dichotomies.