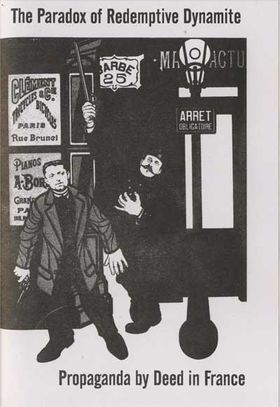 Propaganda by the Deed in France

The late 19th century was an exciting time to be an anarchist. It was a time of assassinations, conspiracies, daggers, and bombs. This is a riveting account of these violent times: the scandalous history of anarchist trends rejected by more conventional anarchists and left out of official accounts. Many anarchists (of the Black Flame variety) would prefer the words of these criminals stayed hidden, with the rationale that they are not likely to attract a lot of new converts, but for anarchists of the time they became more than heros; they became venerated saints with their own cults and mythos. The despair, poverty, and violence of millenarian views of the time with their utopian ideas of collective salvation made "propaganda by deed" very popular despite the many detractors. The Paradox Of Redemptive Dynamite is both a critical look at this anarchist tendency, and a loving tribute to its proponents.

"Why, if the governments use against us guns, chains and prisons, should we Anarchists, who have to defend our lives, remain skulking at home? Should we renounce our idea, which is the truth? No, on the contrary, we will answer those governments with dynamite, bombs, and daggers." - Santo Caserio

The Spot of Oil: On the Execution of Vailliant/Severine

The Hair and the Hunter

Caserio: Why He Killed Carnot

The Feast Of Vultures/Voltairine de Cleyre

Why I Shot Clemenceau/Emile Cottin