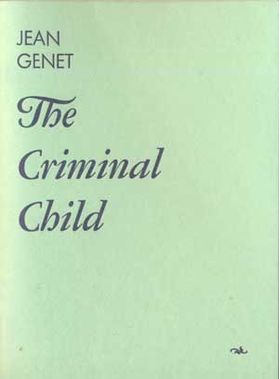 A handsome booklet, with letterpressed cover, of a new translation of a previously censored and unavailable text by Jean Genet. "The Criminal Child" is a critical engagement with the French youth prisons, a reflection on Genet's formative years within them, a document of hostility towards society and its benevolent reformers, and (as argued by the anonymous afterword) an initiatory magical system.


"The Criminal Child" has, until now, never appeared in its entirety in the English language. Such a remarkable oversight—remarkable because it concerns a writer as significant as Jean Genet—would be reason enough for us to render a translation and bring it to print. But, in reading it, reasons far beyond the bibliophilic impulse reveal them- selves and insist on the urgency, timeliness and import of this text.
Though never read on air, Genet intended "L'enfant criminel" as a radio address. Fernand Pouey, the director of dramatic and literary broadcasts for French radio, solicited Genet to speak on his radio program, "Carte blanche", in 1948 as a bit of commentary on proposed reforms to France's youth prisons. (Around the same time Pouey also commissioned Antonin Artaud to broadcast "Pour en finir avec le jugement de Dieu"—both pieces were censored by the powers that be.) A small edition of Genet's text was published the next year and was then all but forgotten.