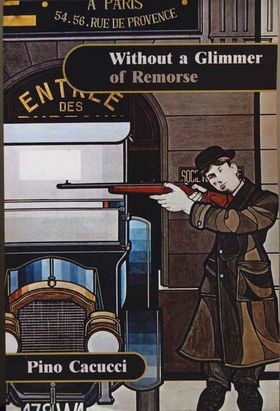 This is a brand new edition of the book that was previously only available from the UK. Now it's been printed by Black Powder Press in a version that is just as pretty and less expensive.

An explosive dramatized fiction of the life and times of Jules Bonnot, his gang (La bande à Bonnot), his associates, and the individualist anarchists of the time, including the young Victor Serge. An affectionate, fast-paced, historically accurate account of the life of the extraordinary Bonnot—worker, soldier, auto-mechanic, driver to Sir Arthur Conan Doyle—a man with a long cherished dream of absolute freedom, and the first bank-robber to use a getaway car; an anarchist who felt it his duty to lash out at bourgeois society, staking his all. A tragically romantic hero, Jules Bonnot emerges from these pages as a wounded dreamer who was to deeply affect the lives of many other unforgettable characters. Includes historical photographs, newspaper clippings, and police mugshots. Beautifully illustrated by Flavio Costantini.

This new second edition of Without A Glimmer Of Remorse has been revised and edited to fix the typographical and layout issues in the first edition.

About the illustrator: Flavio Costantini (1926–2013) was an Italian artist who created portraits of writers and artists for newspapers, and illustrated several novels as well as paintings exploring historical themes: anarchy, the wreck of the Titanic, alchemy and Mozart, the French Revolution and its victims, Yekaterinburg, and the murder of Nicholas II and his family. His works have appeared in galleries across the world, he has been prominently featured in dozens international art magazines, and published several books, including Art of Anarchy (1979 Cienfuegos Press).