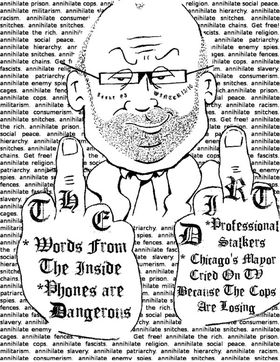 Words from the Inside

An 8.5 x 11, 40 page pamphlet of prisoners' writings, and political commentary.

This issue includes "Black December" by Michael Kimble and Alabama Prison Resistance, "Don't Eat the Fucking Turkey" by Jason Hammond, "Vandals Shut Down the Internet in Humboldt... Again," "The Phone as a Weapon," "Open Letter to the CEO of JPAY at his Home Address" by Sean Swain, "Prison Bankers," "A Report about Corporate Spies," a comic by Sean Swain, "Hunger Strike at Menard," "Using Technology as a Weapon," and "Trans Prisoners are Making Waves," as well as a letter from the editors.

A major purpose of the Dirt since its formation is to take part in the formation of a decentralized network based on anarchist intelligence and the destruction of prison society. Since then, some folks from the internet have busted on the scene with blast!blog, which is seemingly built for the doxing of prison officials.