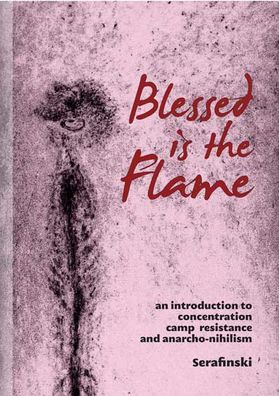 This book, with a name from a poem by a partisan fighter, takes two things that would not necessarily seem to go together, but that, on second thought, are made for each other.

An introduction to anarcho-nihilism becomes tales of resistance in the Nazi concentration camps, almost all of which failed (in the sense that the resisters died), and for which there was never much hope that they could do anything but fail, which are then analyzed in light of anarcho-nihilism.
This book is an excellent example of taking anarcho-nihilism seriously, as a call to action that has nothing to do with the expectation that we will succeed at making the world better.

For those who are confused about anarcho-nihilism, and also for those who use the word nihilism as a trendy way to talk about the same actions that leftists have been doing for decades, this text will be an especially helpful road sign.

What does it take to resist in absolutely futile and overwhelming situations?
Inside of the Nazi concentration camps, places designed to eradicate all possibilities for resistance, inmates organized, sabotaged, and reflexively fought back against their oppressors. Within each of these stories we can find a simmering spirit of anarcho-nihilism, a tendency that challenges us to translate our feelngs of hopelessness into wild and joyous forms of attack.
Because even if we don't stand a chance, we refuse to be led to the slaughter like sheep.