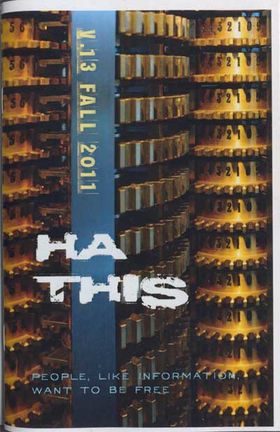 This is the issue from October 2011, and includes articles on Anonymous ("Actions Speak Louder than Words"); a report about the Border Haunt (a creative border action that could be useful again); "Making of a Female Hactivist", "Easy CD/DVD Back up with DD in Linux;" a piece promoting bitcoin, including how to get started using it; info on what to do if you have been contacted by law enforcement; classified ads, and letters.

Hackers can expand the creation of tools to be used by the discontented and dispossessed. Take as an analogy the black bloc tactics from the street. This tactic was developed by dedicated radical anarchists in the squat scene of Berlin, but it can be used by anyone in many different contexts. Are Twitter, Facebook, and Wordpress really the best digital tools available for the revolution? They are the ones used by most activists. These tools were not created for revolution and are controlled by our enemies... --from the editorial