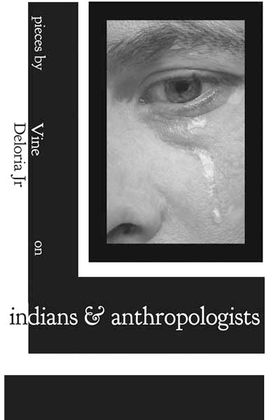 Vine Deloria Jr. was a prolific author on the assumptions and stereotypes that abound in normative US culture. He is famous for a number of books, most notably Custer Died for Your Sins, God is Red, and Red Earth, White Lies. He was a staunch defender of an indian perspective on history and religion and a very deep thinker. He was not an anarchist (although anarchist friendly), but his critical views on things that most people take for granted are well worth our time and attention. His writing is accessible and absolutely funny, if you like that sort of thing.

One essay in Custer is called "Anthropologists and Other Friends," a funny, insightful, and scathing exploration of what it means for outsiders and insiders to co-create each other, in the name of cultural authenticity. It should be required reading for anyone concerned with race in the US, although it is of most use for indians, as, arguably, the most-studied-least-listened-to people on the continent.

Anthropologists were upset by this essay, and 25 years later had a conference in which to say that they had changed and things were better. This pamphlet includes both the original essay (1969) and his thoughts on the conference (1997).