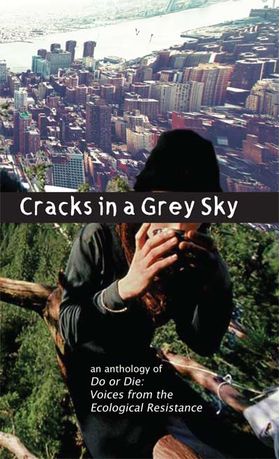 Do or Die was ten issues of a very influential paper out of the UK. Subtitled Voices from the Ecological Resistance, it brought together a wide variety of voices and perspectives from around the world, but was especially meaningful for those who were fighting the monolith in urban spaces, sometimes in their own backyards, vs in the US, where much of the inspiration and activity came from places that could still be called wild.

This packed book is a collection of some of the best of the paper, including the one piece that people still know about, the especially-substantive "Down with the Empire, Up with the Spring!"... The folks at Ardent consider this an homage to the paper, as well as a reminder of some of the creative and fiesty actions and connections still possible in our increasingly concretized world.

Twyford Downs
Trees for Life
A Letter from Scotland
Car Chases, Sabotage, and Arthur Dent
News from the Autonomous Zones
Biodiversity and the British Isles
Open Letter to Minister for Transport
Going Green, a review by John C. Stauber
Shoreham: Live Exports
No Opencast
The New Luddite War
My First Genetic Crop Trashing
Sabbing Shell
Take A Sad Song and Make It Better?
Bashing the GEnie Back in the Bottle

EF! and Tribalism 231
Direct Action Six Years Down the Road
Action Stations!
Down with the Empire, Up with the Spring

Afterword
Three Years After: an interview with the editors