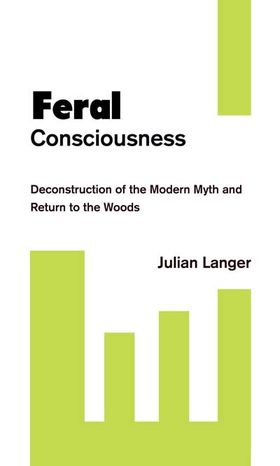 A student of philosophy, Langer has brought the celebrated minds of thinkers such as Sigmund Freud, Friedrich Nietzsche, Louis Althusser – to name a few – into contact with current environmentalism. Langer presents the cold, hard reality of climate change in a no-holds-barred attitude. However, the book is as witty and humorous as it is cynical – Langer shares personal anecdotes, and some well-placed hash tags.

"I wanted to create something that was useful, and that people could connect to," Langer explained. "I didn't want it to read like a work of academia – but I still needed it to have weight."

In many ways, Feral Consciousness was unlike any book I'd read before. Towards the second half, Langer beckons the reader to go forth in any order they like. They're met with lyrics, poetry, essays, and even a culturally-comparative retelling of the Epic of Gilgamesh. When I asked Langer if he drew inspiration for the layout of his work from other writers, or if the idea came to him originally, he quite rightfully replied, "I like the idea of 'uniqueness', but not of 'originality' – all ideas are a reflection. I find 'originality' to be a difficult idea – it doesn't rest with how I see the world. I think we borrow from our experiences, and that's how we create things.