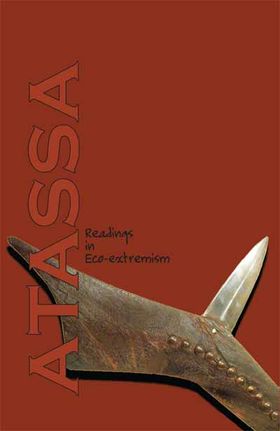 For many readers the first question they may ask upon picking up Atassa is "Where is the anarchy in this?" This is not the anarchism of an evolutionary (or revolutionary) transformation of this cold, bureaucratic world into a nicer, better world. It isn't about ideas. It is about something a lot more uncomfortable. It begins in the moment when Industrial Society and Its Future was translated into Spanish. The premise of that writing, much like the eco-extremist movement that Atassa journals, is that Civilization should be fought. The example of Ted Kaczynski is of what that fighting looks like: it isn't social, it isn't popular. It will probably end in failure and imprisonment.

ITS and other eco-extremists have denounced anarchism. But they have denounced it FROM within and not from the outside of anarchism. Their Wild Nature is similar to most other expressions of anti-civilization perspectives. Their anti-anarchism is an attempt to do what they did as anarchists better. Their anti-anarchism is similar to what post-left, second wave, and anti-state communists, are trying to say when they complain that anarchists often act as moralist, failure-as-a-form-of-life, close minded, parochial position. Often the position is the enemy of the goal and this is especially true as the failures of old strategies meet new (uncomfortable) approaches.

These days there are people who are unapologetically doing violence against people in the name of wildness. This journal is a collection of writings by people who agree with them. Poetry and essays that celebrate anti-humanist action for the wild.

What if the earth were truly first?

Presentation
The Flower Growing Out of the Underworld: An Introduction to Eco-extremism
The spilling of blood on the paths of "absolute truth"
Apostles and Heretics
ITS: The Invisible Menace
Sighs
Lessons Left by the Ancients: The Battle of Little Big Horn
Today
The Return of the WarriorAtassa: Lessons of the Creek War (1813-1814)
The Seris, the Eco-extremists, and Nahualism
(Roma Infernetto-"Shit World"): To Profane and Devour
Indiscriminate Anarchists
Surviving Civilization: Lessons from the Double Lives of Eco-extremists
To the Mountains
Kaczynski's Anti-Tech Revolution: Why and How; A Critical Assessment
The Singing River

Remember, don't believe everything you read on the internet...