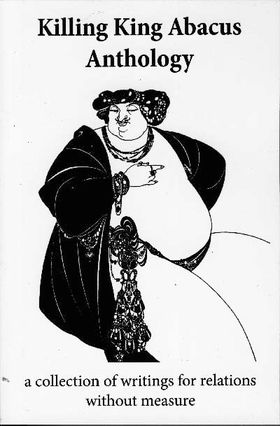 We are delighted to say that this book has finally been produced. (We tried years ago to make it happen, but were stymied, so congratulations to Changing Suns Press for succeeding where we failed!)

Killing King Abacus was a publication that was only produced twice (though it lived on as a web board). Despite its short run it had a profound influence on anarchists in the US, especially on the west coast, as it brought Italian-style insurrectionary anarchist thinking to N. America as translated by Wolfi Landstreicher. It also featured commentary from sashak, Leila, and Wolfi on the topics of the day.

This book includes the full texts of both the original zines (only now with author's names attached), as well as intros from the three producers and sometime-contributor and publisher Chris Kortright.

A significant aspect to this project--and one that separates it from many other anarchist projects--was the influences and tensions that it brought together. The three individuals came together to explore questions of insurrectionary anarchism and translate (primarily from Italian) texts that many in the NA anarchist scene had not yet had access to, but the project did not have a singular vision or voice. Wolfi, Leila, and sasha entered into this project together, but they were influenced by authors and ideas that were often in conflict with each other. In these texts you can feel the desires of Max Stirner and Karl Marx while being pulled by explosive passions ranging from autonomous marxism, communization tendencies, and situationism, to the anti-civ critiques that came from Black and Red...