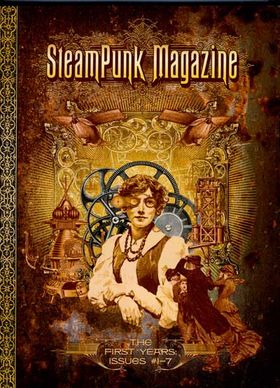 A publication from steampunk's heyday, when anarchy was a recognizable part of it...

Although steampunk has been around as a genre since the 1980s, it came into its own as a subculture and artistic movement in the mid-oughts of the twenty-first century.

In these first issues of SteamPunk Magazine, some out of print for years, there are articles and interviews on music, fashion, politics, history, and mad science. Groundbreaking steampunk fiction and breathtaking illustration run beside bizarre philosophy and manifestos. Learn to etch copper, to build a pennyfakething from an old bike or a jacob's ladder from trash. Discover vertical windmills or sew a pair of spats. The most charming thing (imho) about this publication was the dangerous information it made accessible, i.e. trusting its readers to be intelligent and careful, a disappearing characteristic.

Here collected now are over 400 pages of awesome steampunkery. SteamPunk Magazine has always been known for keeping the punk in steampunk, celebrating steampunk as a part of the global counterculture.

The volume is introduced by the illustrious Jake von Slatt and features a cover illustrated by the remarkable John Coulthart.