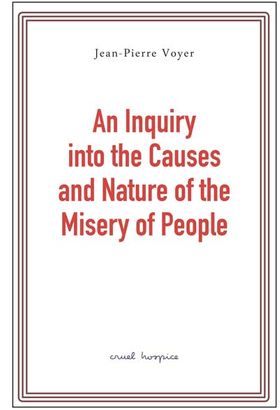 For years I have been looking for something that discusses a substantial critique of Marx and his "little perpetual motion machine" of value theory and monopoly on discussions around the economy. I have lost many friends to this sticky wicket and wanted something to drain the pitch.

Little did I know that just such a title was written in the 1970s and that there was a movement against the economy (or economic thinking) even then. This is that title I was looking for, and (if I were to hope) this is the first in a series of attacks against the Marxist ideological program.

An Inquiry into the Nature and Causes of the Misery of People takes on, among other classic economists, Adam Smith, whose masterpiece is alluded to in Voyer's title. For the first time, and in a systematic fashion, Voyer shows: 1) that the economy doesn't exist except as a false idea and practice on the part of our enemies; 2) that in our world communication, the most human of human acts, is what commodities do, not what people do, and 3) that there is no such thing as exchange value vs. use value, that there is only value, which is the language of abstraction that commodities speak to each other without the slaves who transport these commodities participating in the discussion.