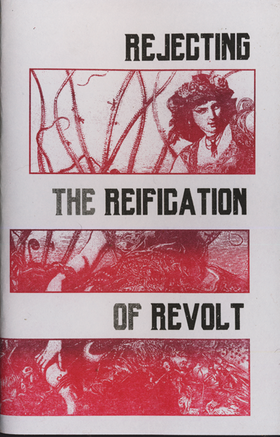 Two essays by post-left anarchists: Rejecting the Reification of Revolt by Jason McQuinn and Leftism 101 by Lawrence Jarach, both of which argue for the necessity of freeing anarchy from the confines of politics, shedding the last vestiges of leftism (understood as a political program, ideological, and representational). As Enemy Combatants puts it "As with most of our offerings, this pamphlet is a testing ground for what is conditioned (identity politics, useless/fruitless activism, and other red herrings), and what is authentically desired.