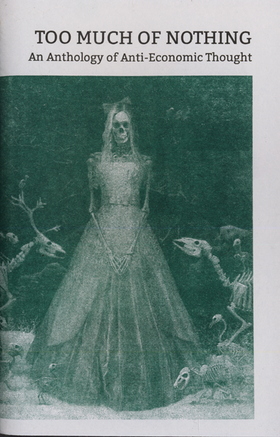 An Anthology of Anti-Economic Thought

A collection of writings by an unnamed Stirner-influenced author(s) on and against the economy, as a social construct, and decrying the influence of Marx as a constraint on the imagination of anarchists. The back cover sports a quotation by Voyer, also criticizing Marx's role in upholding the concepts he was presumably against: "The most crudely false aspect of Marx's theory resides in his so-called critique of economics where, in the guise of a critic, he incessantly upholds the viewpoint of economics itself..."

From the pamphlet:
"Why anarchists are still wrestling with these Marxist ethereal mechanics or even trying to make use of them at all is beyond me. If we reject morality as a non-existent spook, then why not "value" as well, which is simply one of morality's children operating in a slightly different realm?"