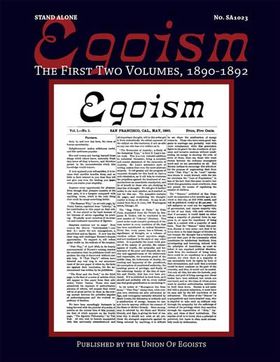 Egoism was the first journal explicitly based on Egoist ideas in the English language, and was published by individualist anarchists Georgia and Henry Replogle beginning in 1890. An advertisement from the period stated:

Its purpose is the improvement of social existence from the standpoint of intelligent self-interest. To gain recognition of the fact, and popularize the idea, that self-pleasure can be the only motive of any act; that any attempt to ignore it must as necessarily be disastrous to human happiness as an attempt to ignore any part of the order of nature. Thus developing a principle for a basis of action about which there can be no misunderstanding, and which will place every person squarely on the merit of his or her probable interests, divested of the opportunity to deceive through pretension, as under the dominance of altruistic idealism. From this basis Egoism will defend the individual against every phase of invasion, whether it be the exactions of political-authority-protected privilege or the decrees of superstition-influenced custom.

In the late 19th Century a pocket of America was ready for an expression of "rugged individualism" to transform into a more coherent worldview. The greatest articulation of that sprang from German philosopher Max Stirner's 1844 book Der Einzige und sein Eigenthum. This book serves foundation of Egoism, which is a philosophy of putting the self in the central concern, rather than gods, other men, "mankind" in the abstract. Though relatively unknown compared to other flag-bearers of free thinking individualism like Friedrich Nietzsche, Robert Ingersoll, Ayn Rand and others, the message of Stirner's book has had a critical impact on many writers and artists who were influential in Europe and America.

Stirner's great work (published in New York in 1907 as The Ego and His Own), while having no explicit connection to Anarchism, was championed early on by that milieu. First in Germany by John Henry Mackay, who saved Stirner from the dustbins, to writers and radicals in Russia, France, Spain and England.

The Egoism journal is most notable for first serializing Walker's The Philosophy of Egoism book, but it also contained writings from and about the anarchist and individualist discussion of the day. While Walker's book would later be reprinted as a single volume in 1905, the journal itself became scarce and near impossible to access.

This issue of the Stand Alone journal reproduces the entire first two volumes published between 1890 and 1892. Additionally it includes rare and never before printed historical materials and a biographical sketch of the publishers.