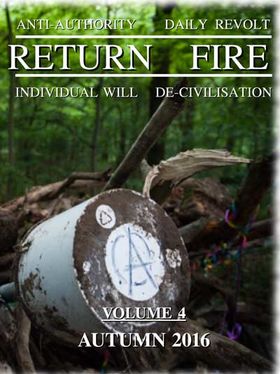 100 pages of riotous goodness from Europe. Available for free online, but for those of you who like to actually be able to focus on what you read, this is for you.

Contents include: an editorial, Whether to Act or Merely Dream (refuse all representation and dialog with powers-that-be); Authorities Finally Confirm Stingray Use in Prison Island; Panopticons Then and Now (self-defeating paranoia held up to the reality of data overload); Education Centres Plundered and Vandalized in Santiago; Special Hydraulic Fracture (extraction in the sights); Antagonistic Margins (the queer relation of desire, terror, and seduction); On the Catastrophe of the Salmon Farms and Maritime Devastation; Taking Apart Authority (an argument for diffuse and well-timed blockages); Another Figure of the Migrant (having done with the usual victimistic homilies); Invasive (on "non-native species"); Smart Attack!; The Stories Civilization Holds as Sacred (continuing legacy of monotheism); Are There Similarities, Beyond the Obvious, Between Human and Non Human Prisons? (at the crossroads of incarceration methodologies), and a whole lot more.