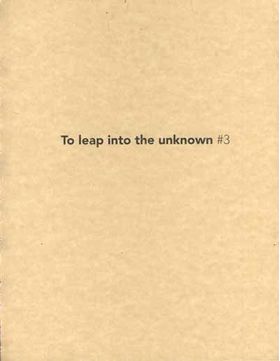 This is a translation of the third issue of a publication from Lisbon, Portugal, which was a collection of original texts and translations on informal organization, projectuality, affinity, and insurrection. This third issue was written through 2014, after the excitement of 2009, the falling apart of informal groups in 2011, the refusal to accept that, and the attempt to somehow be in a better moment where we can take the initiative instead of following the events around us. 50 pages, 8.5x11, glue-bound, simple and pretty.

"Anarchists are utopians. I do not deny it. Not in the sense of achieving a utopia, perfect and uncriticised in all aspects, but in the sense of trying to reach where one cannot remain. Where everything is played at every moment. However, the search for that utopia takes us along paths of freedom, able to satisfy the core of our internal pulsations, connecting us to those who want the same, trying for ourselves, refusing the usual ways of being -- cultural or subcultural -- whenever we can, experimenting and opening new possibilities, incomprehensibly risking comfort and safety for something that we don't even really know how to define. Sometimes risking the acceptance of the anarchists themselves. How many times do we get it in our heads, bleeding from so many blows, to throw everything -- everything going on inside us -- out the window? But every time discouragement emerges and resignation knocks at the door, an inexplicable gust blows us through the back window, bound for other fields -- we sure are stubborn."