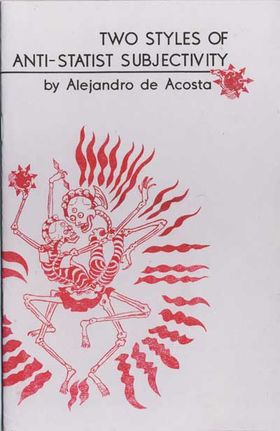 For those of us who think that de Acosta has some of the smartest and most interesting things to say about anarchy in modern times, this pamphlet will be bittersweet, as it reminds us that he is not writing much any more. This is an elegant pamphlet from Enemy Combatant, and includes his first piece on Stirner, written for International Studies in Philosophy.

This pamphlet reproduces the first piece I wrote on Stirner--recovers it, in fact, since I daresay it will find more and friendlier readers at book fair tables and other sorts of encounters than in the pages of the peer reviewed journal where it first appeared about ten years ago. As I wrote the article, I was enjoying the inherently paradoxical task of teaching Stirner's book in college philosophy classes. I was exploring from (away from) leftist anarchism, as some of the confused language around civilization and barbarism will show (though one could do much worse than old Kropotkin and Graeber's smart little book!). So I was of the mind to present anarchist ideas in an academic setting, as part of the curriculum. I was still somewhat of that mind when I wrote the Stirner section of an article called "Anarchist Meditations." I was not of that mind when I wrote an essay called "How the Stirner Eats Gods" for Anarchy: a journal of desire armed, and I have not been of that mind since then.