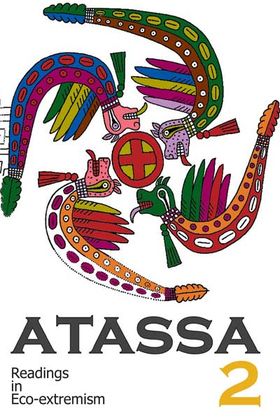 Not necessarily the most controversial thing LBC has ever published, but certainly the publication that has caused the most furor so far. This journal gives a platform to non-anarchist, ex-anarchist, and a-anarchist, eco-extremist thought, not limited to, but including, some people who defend killing people. While neither of the two issues of this journal include communiques from the folks who claim to have done such killings, there is some sympathy with, and also some not-necessarily-sympathetic analysis of, the phenomenon, which apparently is extremely dangerous. So, we have all been warned.

This issue does not include any direct responses to the brouhaha in certain circles about the first issue, but there is a lot of what could be considered indirect reaction, including most significantly the heart of this issue--an indepth look at christianity: how deeply it has been instilled even in groups that consider themselves atheist, and what some of its underbelly has included historically.

Some would argue that eco-extremism is one of the few lines of thinking that takes seriously the idea that we are all complicit in our slavery, that we all have choices to make every moment of every day about how and if to resist.