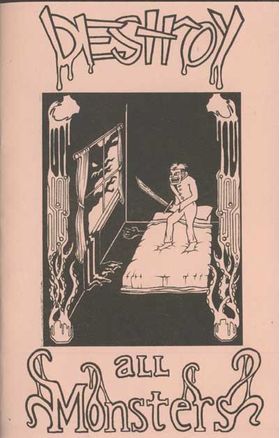 One of the oldest, most rigid, and seemingly instinctual thought-patterns is the figure of the monster. Instilled in us since childhood, the monster has imprinted a fearful image so compelling, so deeply buried in our consciousness that we're at once deeply moved by it and rarely aware of its power over us. This children's DIY guide offers some methods for destroying them.

This is a pamphlet that was floating around in an oft-recopied version for decades, each year getting blurrier and blurrier. This is the first clean new version we've ever seen, put out by Enemy Combatant.

Monsters do exist. Sometimes they disguise themselves as piles of filthy laundry huddled in the corner of your bedroom or as dancing shadows cast by the overhanging tree that brushes against your window pane, but do not be fooled. Those noises that can easily be explained away by rational men are in fact Monsters. For Monsters have many allies, take on many deceptive disguises, and have paid out many high-priced bribes just so they can eat you right up.