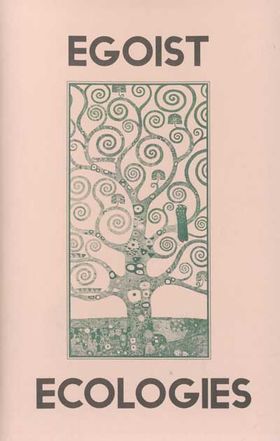 A series of pieces demonstrating the interest and concern of some egoists for questions of the world around us, with far greater breadth and imagination than some who make it their business. Includes the strong "To Love the Inhuman: a critique of John Zerzan's 'Animal Dreams' "; "Living and Breathing Anarchy: relationships of the unique against organized deadness" (on being between and without all labels, as being indicators of dead tissue); "Symbiogenetic Desire: an egoist conception of ecology" by Bellamy Fitzpatrick, and "My Worlds and I" (a poetic entry by Apio Ludd -- aka Wolfi Landstreicher).

Highly recommended, as are so many of the pamphlets from Enemy Combatant.

...The denial of oneself as having an essential self, a perspective that will be defined and developed further in this piece -- implied by egoism is the basis of this ecological worldview, as one's sense of self expands to subsume and be subsumed by one's habitat and symbiotes. Through such an analysis, one steers clear of the twin alienations of, on the one hand, the tiny self, that is, the self as an independent, enclosed, free-willed subject who remains relatively stable through space and time and who interacts with a world of objects; and, on the other hand, the reification of the non-human world, that is, the construal of nonhuman organisms as a more or less unified whole that acts collectively for the good and into which one can dissolve oneself or to which one can swear allegiance...