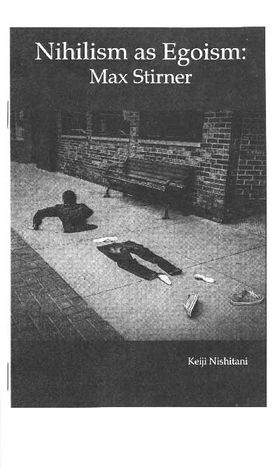 A non-anarchist's take on many things of interest to modern anarchists, most significantly the relation of Nietzsche's thinking to Stirner's, from Nishitani, a scholar who works from the original German as well as an earlier English translation of Der Einzige.

Keiji Nishitani (è¥¿è°· å•“æ²» Nishitani Keiji, February 27, 1900 â€“ November 24, 1990) was a Japanese philosopher of the Kyoto School and a disciple of KitarÅ Nishida. In 1924 Nishitani received a Ph.D. from Kyoto University for his dissertation "Das Ideale und das Reale bei Schelling und Bergson". He studied under Martin Heidegger in Freiburg from 1937-9.
He held the principal Chair of Philosophy and Religion at Kyoto University from 1943 until becoming emeritus in 1964. He then taught philosophy and religion at ÅŒtani University. At various times Nishitani was a visiting professor in the United States and Europe.
According to James Heisig, after being banned from holding any public position by the United States Occupation authorities in July 1946, Nishitani refrained from drawing "practical social conscience into philosophical and religious ideas, preferring to think about the insight of the individual rather than the reform of the social order."
In James Heisig's Philosophers of Nothingness Nishitani is quoted as saying "The fundamental problem of my life â€¦ has always been, to put it simply, the overcoming of nihilism through nihilism."