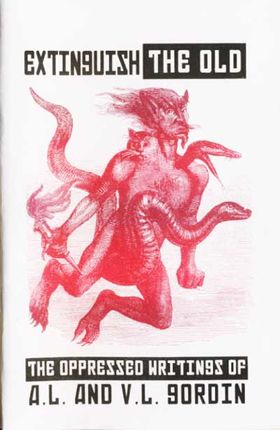 The Oppressed Writings of A.L and V.L. Gordin

This pamphlet collects just a few of the surviving literary fragments and insurrectionary ephemera produced by the Russian individualist anarchists and brothers, A.L. and V.L. Gordin, before and during the Russian Revolution. As one example of the anarchic pranks they became notorious for, in 1917, they founded a mock movement that they called the Union of the Oppressed Five, referring to the categories of humanity that endured the greatest hardships under the yoke of Western civilization. These were worker/vagabond, national minorities, women, youth, and individual personality. The organizationalists and rationalists of the Russian anarchists considered the Gordins to be wild-eyed annihilators of all discipline and party authority.