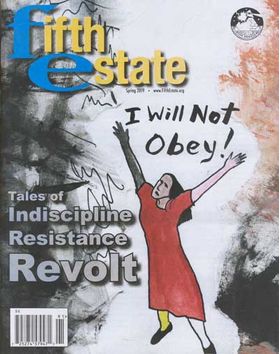 This issue features cranky letters, including one from JZ, who is predictably complaining about not getting enough attention, and the author of a book reviewed in the previous issue. Letters sections are fun. Table of contents includes... The Revolution Will be Powered by Shakti Energy (by John Clark); Techno Madness: an overview (by the afore-mentioned Zerzan); strangely, a piece by Bill Brown on the Yellow Vests (maybe it's a different Bill Brown than the one previously of the Surveillance Camera Players?); When Detroit Raised the White Flag of Surrender (on Tecumseh and fighting Empire); a piece on treason (by David Rovics), and so on. This issue, like the last, addresses a spread of topics, and includes many authors we've never heard of, so that's cool. This issue also committed to color, and the layout is unusually pretty, so that's also cool.