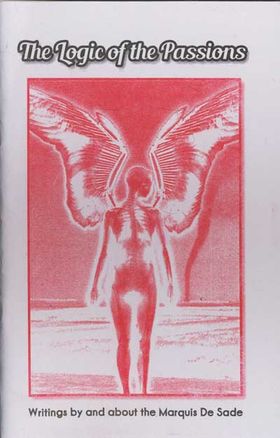 The Marquis de Sade was the first modern atheist who openly declared in writing his willingness to push atheism to its logical conclusions. He certainly embraced the arguments put forward by Diderot, d'Hollbach, and their like, but he wasn't willing to stop where they stopped. Rather he applied the wickedly cutting logic of passion to get to the heart of what a godless reality would be.

Sade, with a psychological perception far exceeding that of Kraft-Ebing, Freud, Havelock Ellis, and their like, recognized that the passions were utterly singular (thus doing away completely with the concept of perversion--if each passion is unique, none can be any more or less perverse than any other) and that thus their logic, though quite rigorous, was, like the passions, specific to particular unique individuals. This does not mean that broader conclusions cannot be drawn from this logic; it means simply that those conclusions will mainly involve the undermining of all alleged universal values.

It is precisely this that makes Sade frightening.

This is a pamphlet from Enemy Combatants, prime purveyor of all things egoist and anti-civ, including Backwoods #1, and Corrosive Consciousness.