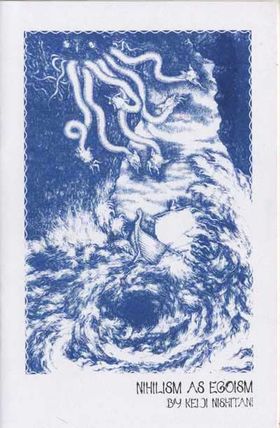 Highly regarded in the history of Japanese philosophy, Keiji Nishitani (1900-1990) was one of the foremost Eastern minds grappling with the challenge of Western nihilism and its relation to the Buddhist concept of sunyata (emptiness/voidness). At the center of his philosophy lies what he called "the abyss of nihility"--the absence of any meaningful relationship between the human being and the indifferent, impersonal world it is randomly cast into. Rather than ignore this abyss, Nishitani sought to go deeper into it.As he once put it, "the fundamental problem of my life has always been, put simply, the overcoming of nihilism through nihilism."

This essay is a decidedly sympathetic discussion by Nishitani on the often-overlooked nihilist dimension of Stirner's project. This pamphlet is the Enemy Combatant version.