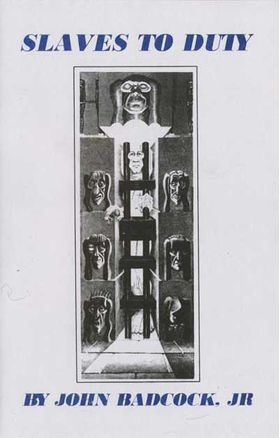 This is an address delivered by the conscious egoist John Badcock, Jr, in 1894, before the South Place Ethical Society, London, when he critiqued the dutiful subject as a deluded but willing slave. The talk was so unexpectedly powerful to those in attendance that it was immediately printed as a pamphlet by William Reeves that same year and became something of an underground classic in British radical circles.

It has been long out of print, and in the face of the disturbing lack of interest of current North American anarchists in the subjects it deals with (mental bondage and voluntary servitude), we consider this reprint, by Enemy Combatant, to be timely in a world infested with behavior-regulating, guilt-tripping, moralists--including communist, socialist, humanitarian, politically-correct, and revolutionary micro-fascists of every description.