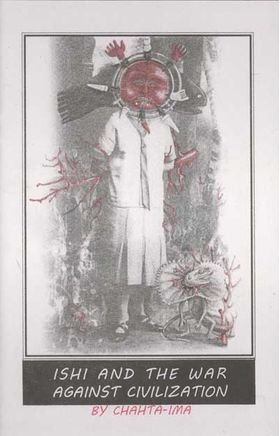 An essay by Chahta-Ima, weighing in on the question of tactics, controversy, and eco-extremism, in the context of the infuriating, outrageous, and tragic example of Ishi, last of his nation.

There have been lectures to eco-extremists that this is not how a war against civilization is waged. Very well, let’s go ahead and take a closer look at an actual war against civilization. The editors of Revista Regresión have already written an extensive series of articles on the Mixton Rebellion and the Chichimeca War that swept much of Mexico in the 16th century, and we heartily recommend their work here. In this essay, we are going to augment their arguments by having recourse to a well-loved example of a “cuddly” and tragic Indian, Ishi, the last of the Yahi tribe in the state of California in the United States. In this exercise, we don’t pretend to know everything about those members of a Stone Age tribe that was hunted to extinction by the whites. Insofar as any historical analogy is flawed ipso facto, here we will at least try to take the lessons from how the Yahi fought, their attitudes toward civilization down to the last man, and how the shape of their culture problematizes anarchist and leftist values held over from the Enlightenment. This essay hopes to show that the Yahi’s war against civilization was also indiscriminate, devoid of Western values of solidarity and humanism, and was a duel to the death with domesticated European life. In other words, it is a model for how many eco-extremists see their own war carried out from their individuality. Ishi, far from being a model “noble savage”, was the last man standing in a war against the whites waged with the utmost amount of brutality and “criminality” that the now extinct Yahi could muster.